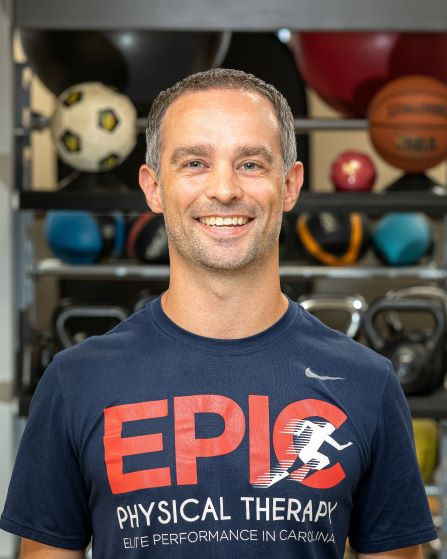 Originally from northern NJ,  Eric moved to Raleigh in 2010. He earned his Bachelor of Science in Exercise Science from Bloomsburg University of PA and then completed the Physical Therapist Assistant program at Nash Community College in 2015. He has achieved his Advanced Proficiency in Orthopedics Certification through the American Physical Therapy Association, and also has gained his certification as a RockTape Instrument Assisted Soft Tissue Mobilization (IASTM) practitioner. Prior to joining the team at EPIC PT, Eric worked as a PTA at another outpatient orthopedic physical therapy clinic in Raleigh, NC. He enjoys working with all orthopedic conditions, but specifically enjoys working with the hip, knee, and shoulder most.

Eric grew up playing soccer competitively through his school years and with traveling club teams. He also ran varsity track and field all four years of high school. He gained his interest in physical therapy through his love for sports and understands the desire to get back to competing after having an injury.

In addition to physical therapy he loves spending time with his wife and two young kids, walking, hiking, camping, and going to the beach.